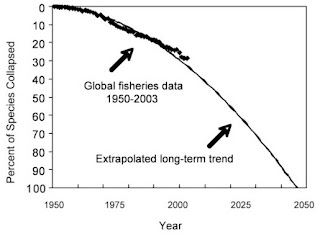 Over-exploitation of ocean animals is happening at such an alarming rate that it seems likely that we may lose some species before we can actually do anything concrete to save them. Sharks are the most obvious example of this. Not since the North American buffalo or the passenger pigeon has a species been so ruthlessly slaughtered by humans.
It has been estimated that the current species extinction rate is between 1,000 and 10,000 times higher than it would naturally be (IUCN), and with no precedent in human history we can only guess at the consequences (but we’re all pretty much agreed it won’t be good).
As Asia has its ‘industrial’ revolution and appears to be taking a decidedly more pragmatic and less sympathetic approach to the ‘harvesting’ of our oceans the pressure is not going to be relieved any time soon. With so many mouths to feed this is not entirely unexpected, but there is something that can be done.
Shark fin soup will not save anyone from starvation, it is a status symbol which is used a bit like champagne, for celebrations, special occasions and to show off. The Chinese people can survive without it.
Education, demand and popularity are the key here, no restaurant survived by serving unpopular food. If we all took a few minutes to scan the menu of every Chinese restaurant we pass and if they serve shark fin soup having a quiet word with the owner, we could make shark fin soup a thing of the past. Outside of China at any rate.