It should be common knowledge by now, mass balloon release events are bad for wildlife. But the message has yet to sink in, even with organisations that should know better.

According to the Marine Conservation Society “when balloons are released they don’t just disappear. They float back down to earth where they are the same as any other litter. Balloons are mistaken for food by many species of wildlife. Once balloons have been eaten they can block the digestive system and cause animals to starve. The string on balloons can also entangle and trap animals”.

Last year Blue Planet Society highlighted the threat posed by the 30,000 balloon release event held to celebrate Gibraltar National Day. Dialogue is ongoing but Gibraltar minister for culture Steven Linares has pledged to use only “environmentally-friendly, biodegradable balloons” which is great, except for one thing, no such balloons exist.

To be fair, most organisations reacted very quickly and cancelled the event within hours of being asked. But they shouldn’t have had to be asked. We’re talking the very basics of environmental awareness here, and it’s high time the message was heard. Balloons are bad for wildlife, bad for your company’s image and a blight on the environment. So Britain, please, no more balloon release events. 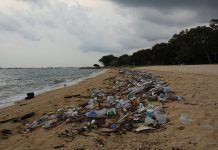